We spent the third and final leg of our Indonesian holiday in Yogyakarta. It all goes back to a sunny May day in Baltimore... 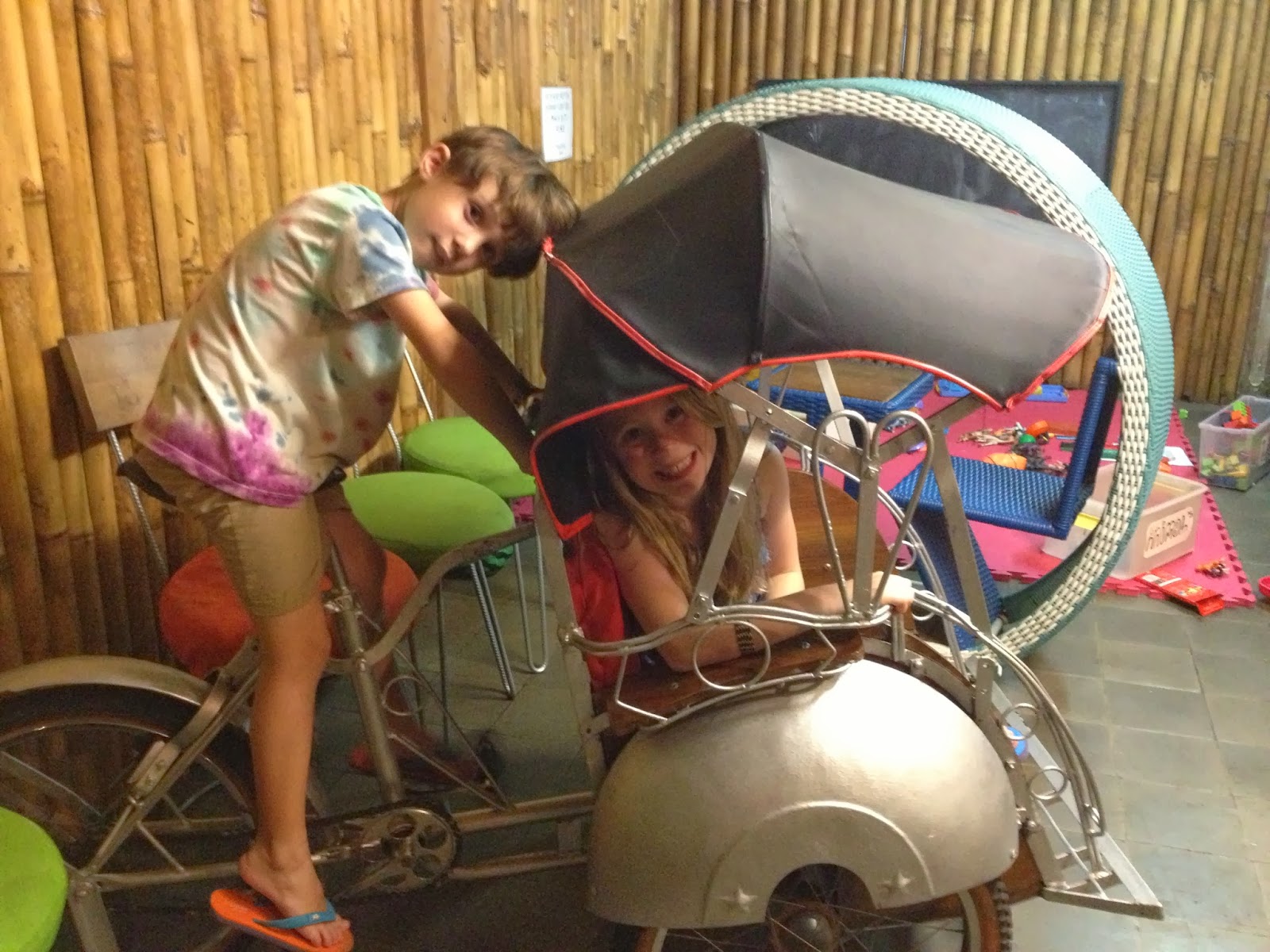 Saying goodbye to our wonderful Baltimore neighbors, Jan Houbolt and Rachel Wohl, Jan said "if you find yourself traveling to Indonesia, could you please go visit Yogyakarta? There is a little NGO I'd like you to see." I said, "I'm sure we will travel through Jakarta." Er - yeah - totally different cities. Guess it was my first of many Indonesian geography lessons. Both cities are on the large island of Java. Jakarta, the capital and largest city, is on the northwest shore while Yogyakarta is near the southern coast and more central on the long, narrow island. We've heard it takes about 12 hours to drive between the cities. Yogyakarta, with a regional population of about 3.4 million, is known as a center for Javanese arts and culture and is home to one of the country's major universities. And despite the English spelling, it's pronounced "Jog-ja" ("jog" as in jogging, like the thing I've not done since I arrived in KL, and "ja" like the beginning of Jack). So four months after Jan mentioned Yogyakarta, Robin booked Camp WienerPohl on the orangutan adventure; and, we did indeed find ourselves looking for 9 more days of adventure in Indonesia. Jan sent me this message about the NGO (not-for profit, nongovernmental organization) called PPMK:

"I do not know if I sent you the video/YouTube (http://www.youtube.com/watch?v=tpnoSBtVJUQ) that my lifetime best friend Jack made after he was diagnosed with cancer and about 18 months before he died. It is a remarkable story of a Vietnam vet who declined into the depths of self destruction, drug addiction and then turned his life around and became a powerful story of goodness utilizing all of his Vet’s benefits to start and support PPMK. Promised him on his death bed literally that we would replace his Veterans benefits and keep PPMK alive."

Well, that's a great hook. PPMK is the acronym for an organization whose name means "Empowering Women to Fight Poverty". PPMK provides microcredit to poor women in villages around Yogyakarta. Microcredit, part of a global microfinancing movement, provides very small loans (usually under $250 US dollars) to people living in poverty. PPMK's loans are nearly exclusively to women and must be used to start or build small businesses. Think about it this way. In the long run, to empower women, you start off in the family. In a family struggling to get by, if a woman brings home money to support the family, she has an elevated importance. She also gains a voice in economic decision-making. This tends to lead to more emphasis on education (and added resources) to send children to school.

PPMK's amazing director, Lastri, arranged transport and our hotel. She picked us up in the airport (despite the 6:00 am arrival!) and invited us to eat breakfast and have coffee at her home as we started the day. We then spent the morning in PPMK's rustic office, beautifully set in a rice field on the edge of town. Lastri reviewed with us the loan-making process, including the loan application forms, assessment tools, and loan agreements. PPMK currently supports 200 loans in multiple villages and sub-villages in the Yogyakarta region. The next day we headed out on motor bikes to see the loans in action by visiting women in the villages. This was an incredibly powerful experience. 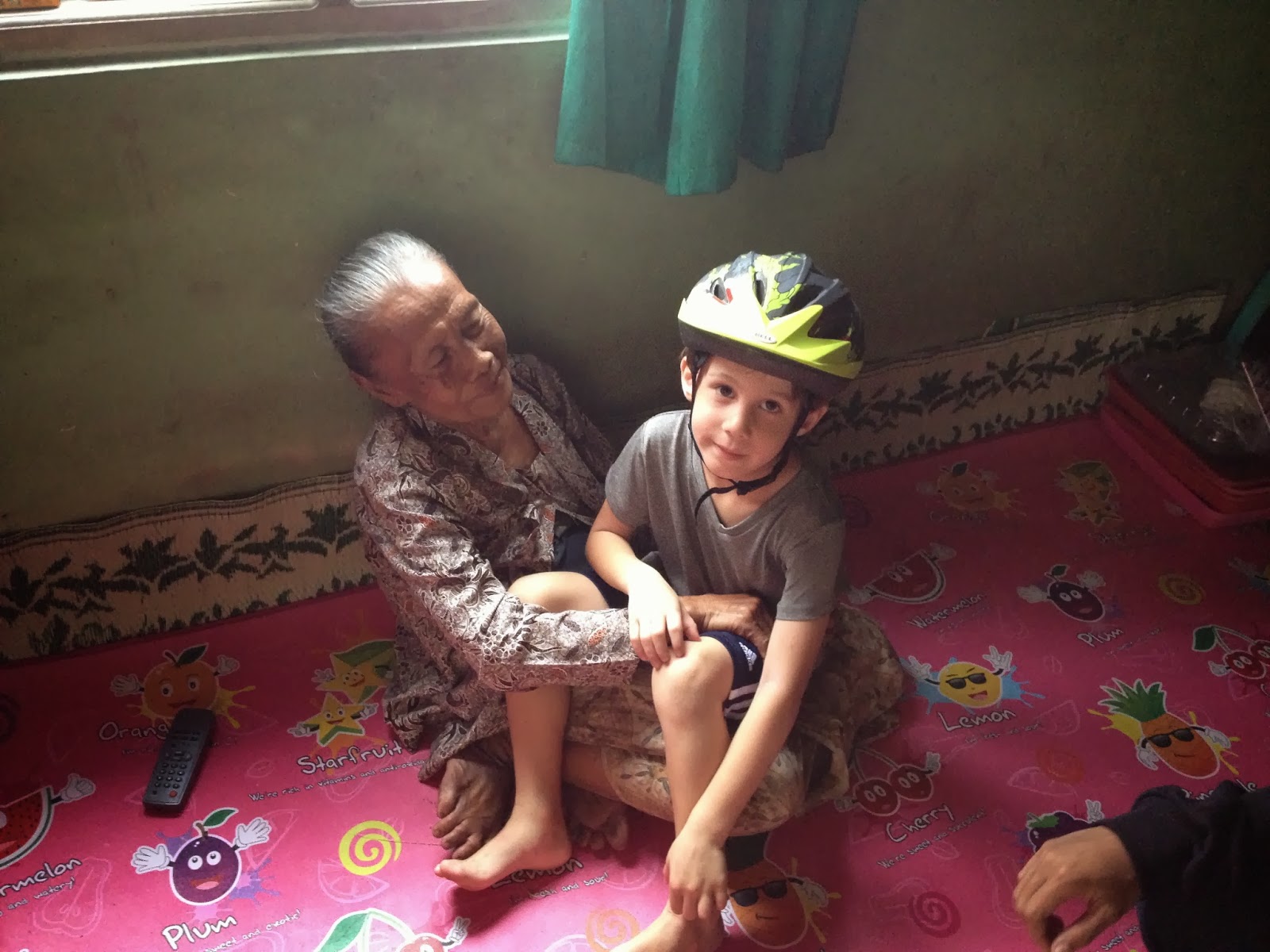 Coming into this experience, I expected that I'd want to drop $50 bills on the way out the door of every house. Surprisingly, I didn't feel that way. From my assessment, microcredit works particularly well here because while people are very poor, there is an economy operating. Many individuals (not necessarily the ones receiving their first loans, but others in the villages), have disposable income to buy snacks or goats. Tourism in the area also makes a market for handicrafts. The women were not seeking charity, but are building a craft and a business - and they have an apparent pride in their efforts. That's not to say that money doesn't help. The administration of PPMK needs support, but the distribution of resources through the micro loans delivered by PPMK develops sustainable efforts.

What I did feel was overwhelmed - seriously blown away - by the generosity of all. People who had seemingly so little, gave us so much. We visited a loan repayment meeting. The women gave Violet and Tyler beaded bracelets - and would not allow us to pay for them. And they made me take a bag of boiled peanuts after I mentioned that they reminded me of home (thinking of you, Uncle Simon!). The women all gave up their time to visit with us. When you are earning only 2 cents to sew a complete bag, pausing for 15 minutes to talk with us, show us your workshop, and teach our kids a skill is forgoing a tangible portion of income.

The kids definitely realized what an incredible experience this was for us.  When given the option of choosing what to do on our last day in Yogya, they both asked to spend the morning with Lastri and the folks at PPMK.

It was such a powerful experience that I can't do it justice in words. Maybe these pictures will help convey my feelings:

This experience absolutely moved me to engage more with PPMK. If you are looking to support an organization, this is the real-deal ground roots effort. Okay, want to find out more? Here's the PPMK website: http://www.ppmk.net/  If you are in the US and want to donate, PPMK's US-based financial funding is here: http://www.optglobal.org/. (100% of funds go to PPMK. A $250 donation will support the development of at least one new business). You can also FaceBook friend "PPMK Jogja" to receive their monthly newsletter. Some the the US team supporting PPMK also started profiles. They are in draft, but showcase the many women PPMK supports. https://www.dropbox.com/s/gyo8l3i9stq8ulp/Project%20card%201%20edited.pdf


Organizations function by the power of their people. Lastri -- I know this will embarrass you -- but you are a superstar! Lastri's passion and caring make the organization run. We were, again, overwhelmed by her generosity as our host and now as a friend. Lastri put work and life on hold for a week to take care of the Pohl Garibaldi clan. We deeply thank you!

While we were in Yogyakarta, Lastri and her team also took us out and about town. We saw a spectacular Ramayana ballet at the Prambanan, a collection of Hindu temples circa 850 AD. The show was so, so good. All of us, even Tyler, was entranced by the performance. It helped that the show included excellent sword fighting scenes and lots of humor! 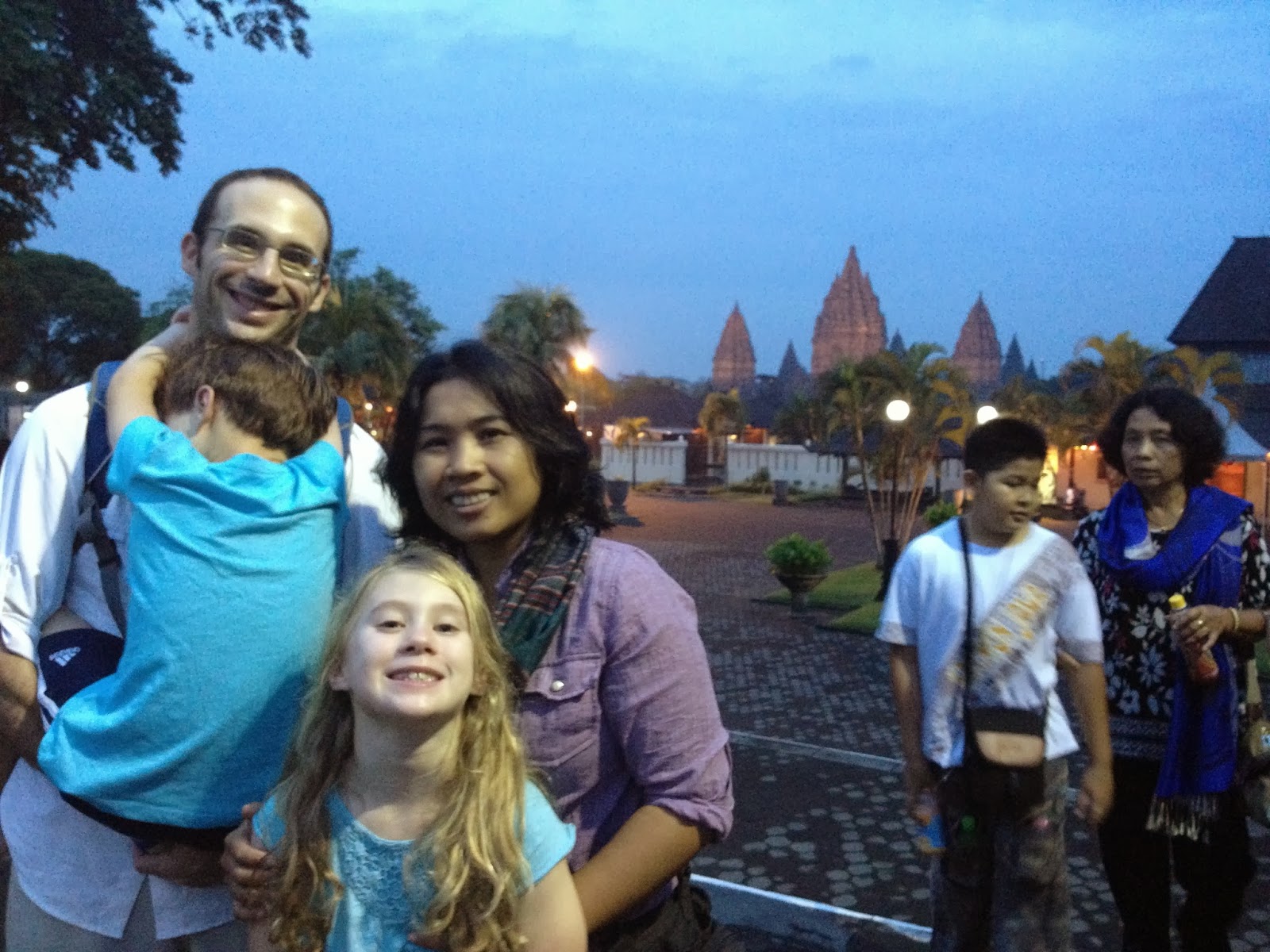 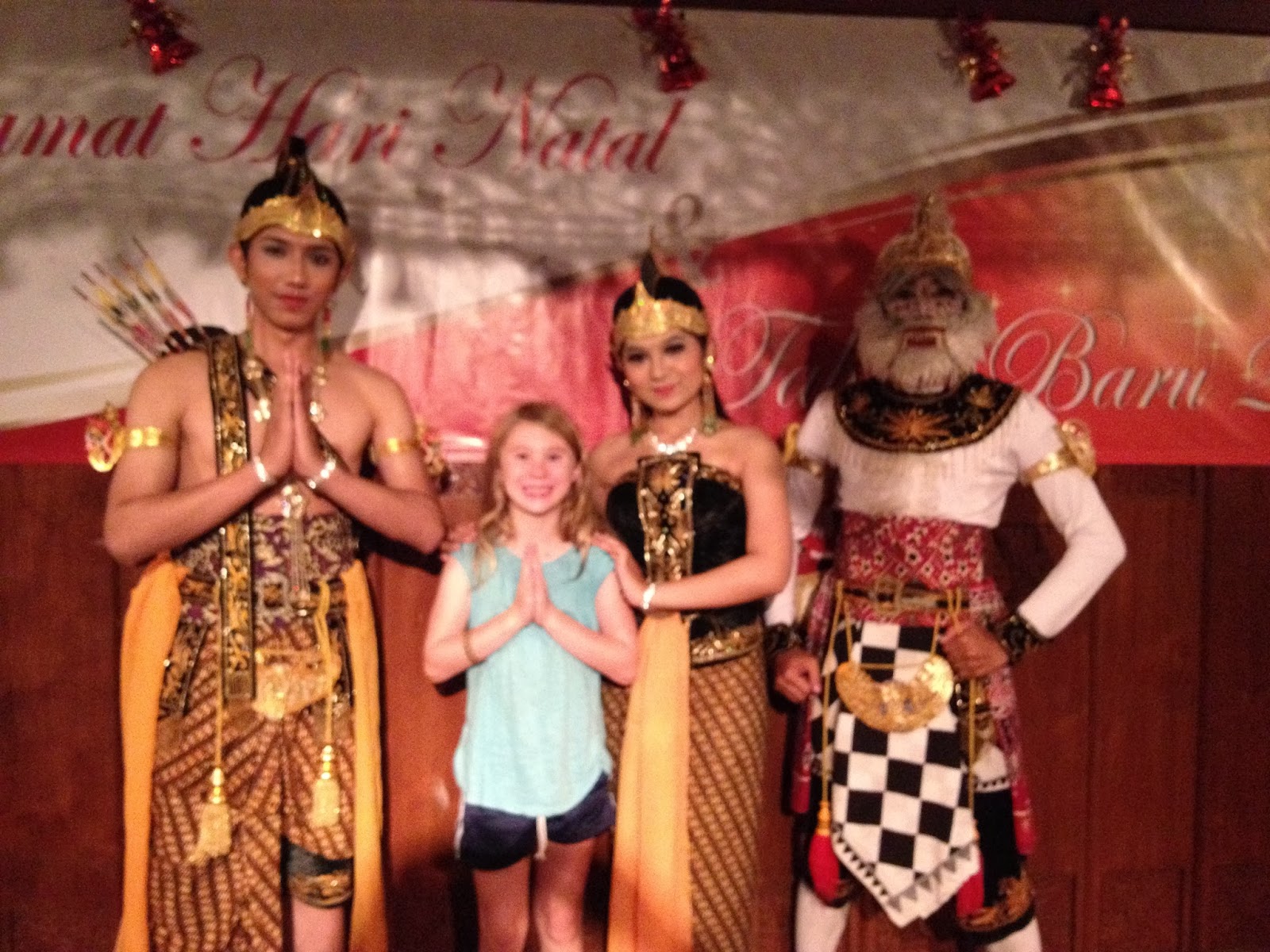 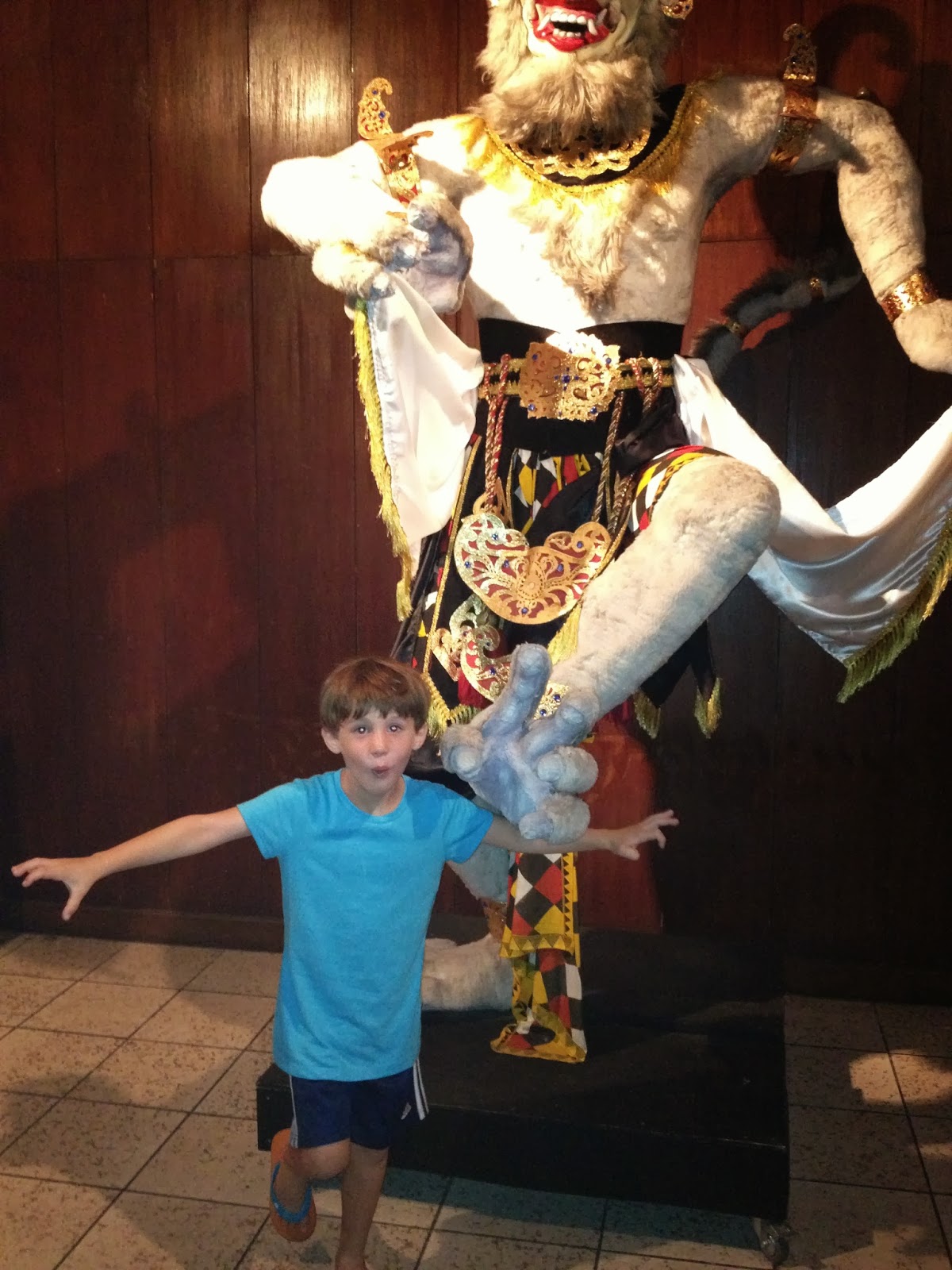 We also hiked up a volcano. Tyler got a lift from Brian who noted carrying 40 lbs uphill as his day's cardiac exercise. 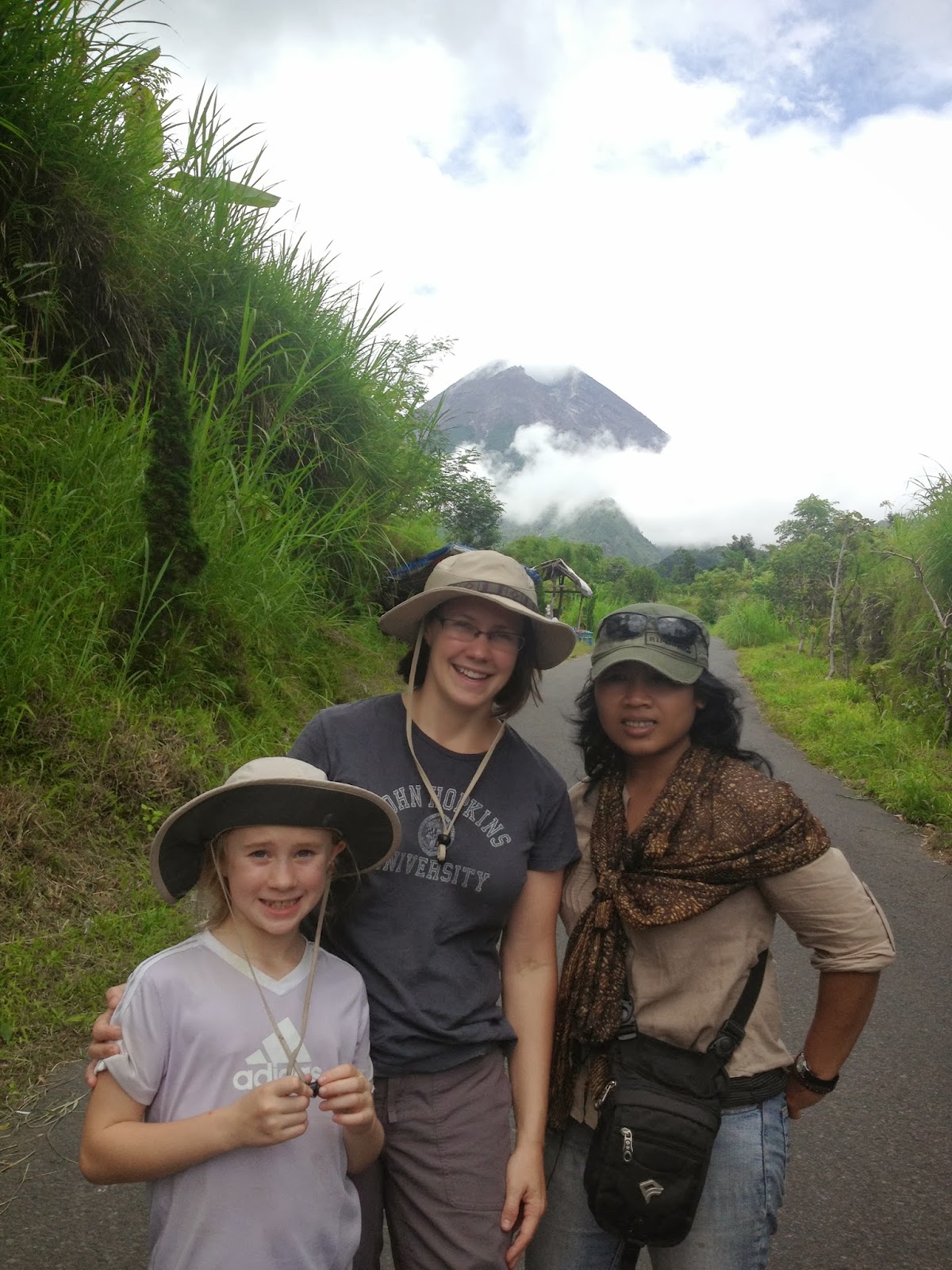 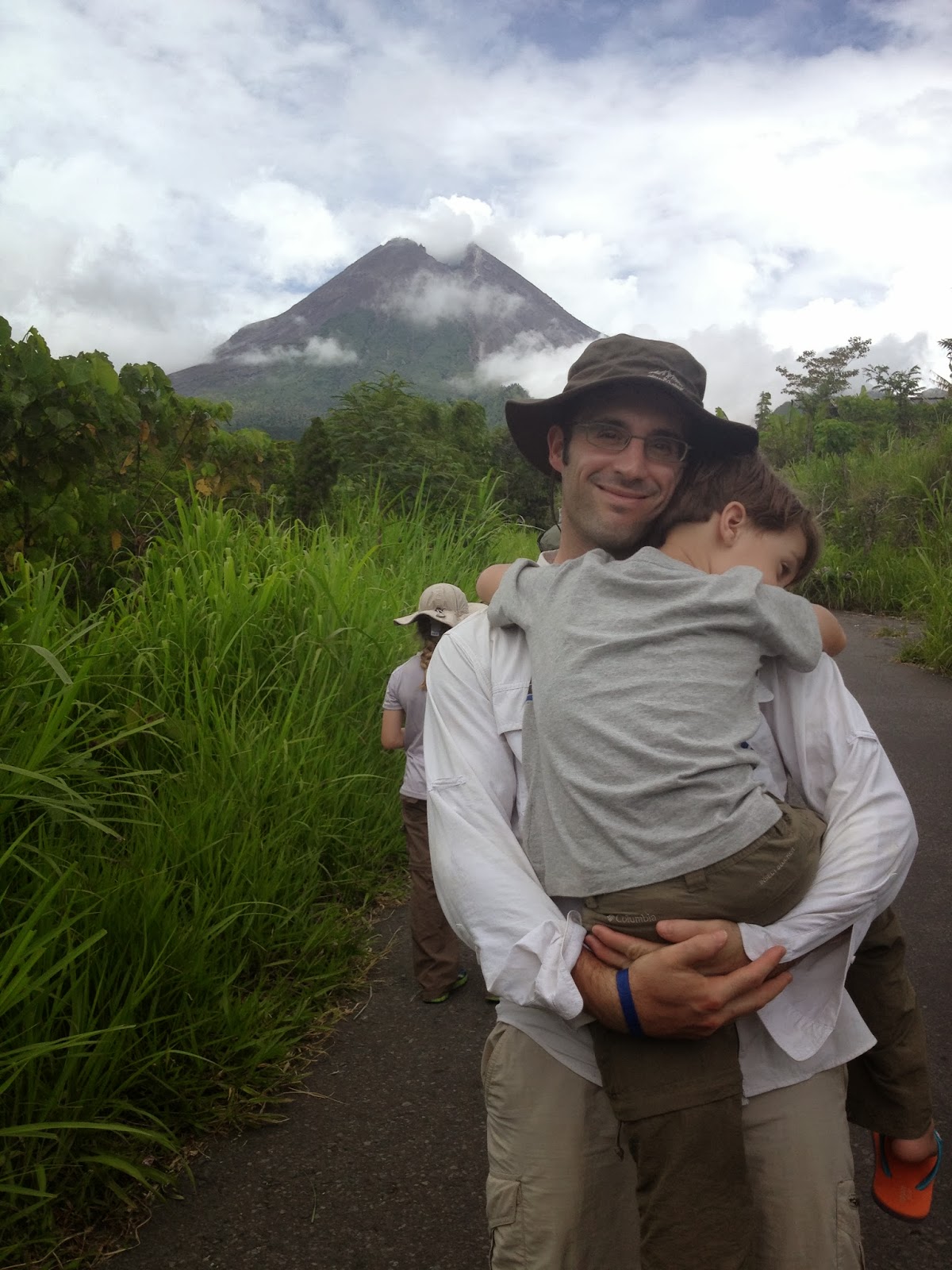 A Yogyakarta highlight is visiting Borobudur. We recently had some visiting JHU faculty in town that weekended to Jogja simply to see Borobudur. Borobudur is a 9-century Buddhist shrine. Set on a hill, the pyramid-like structure has multiple concentric levels, each with stone sculpture reliefs depicting the path to enlightenment. 500 seated Buddha statues surround the walls. At some point, the shrine was abandoned and overtaken by jungle and volcanic ash. In the early 1800's the monument was relocated and unearthing began in 1835. UNESCO deemed Borobudur a World Heritage Site in 1991. Lastri and the PPMK team brought us here for a sunset visit.  (http://www.borobudurpark.com/) 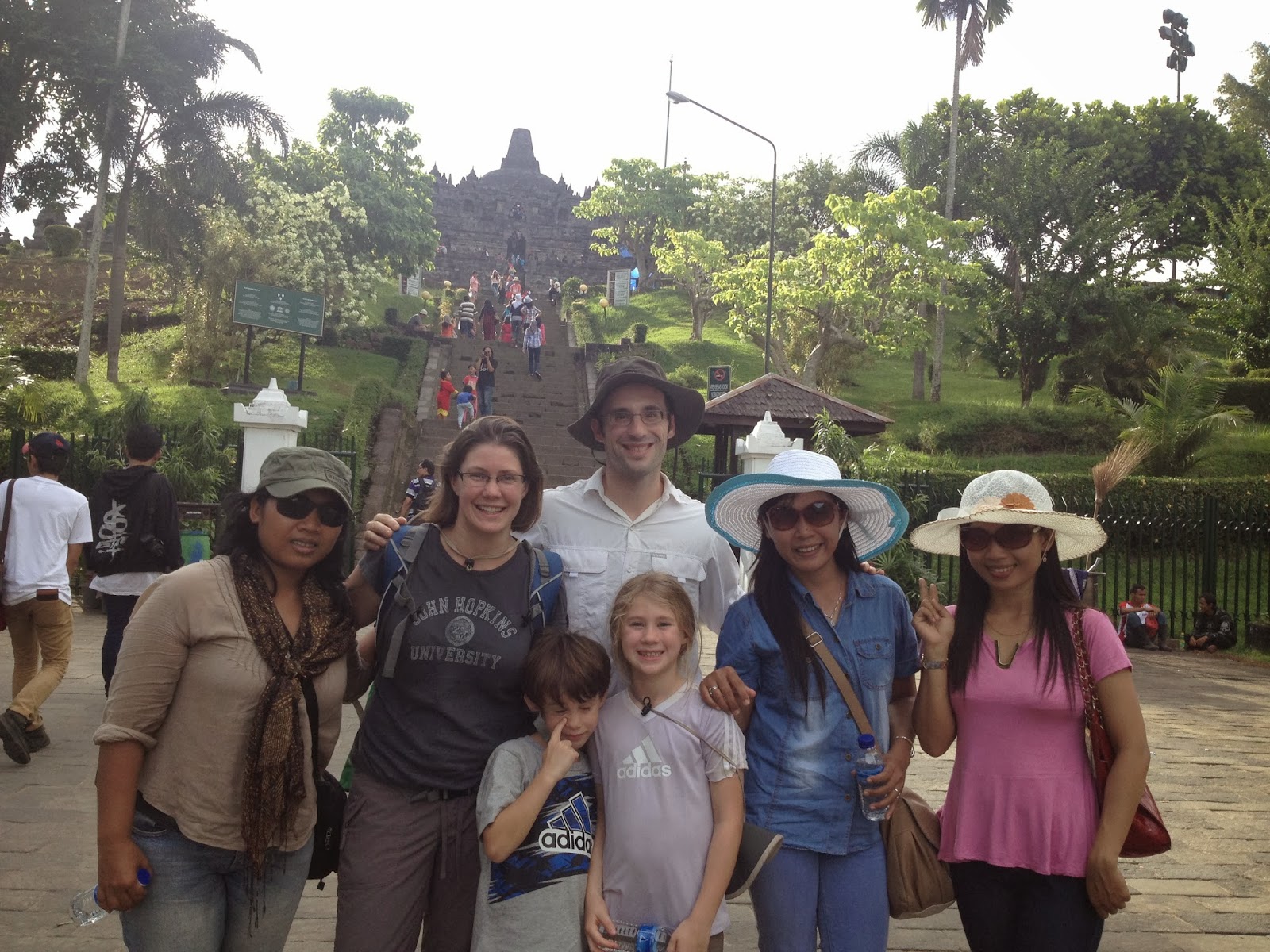 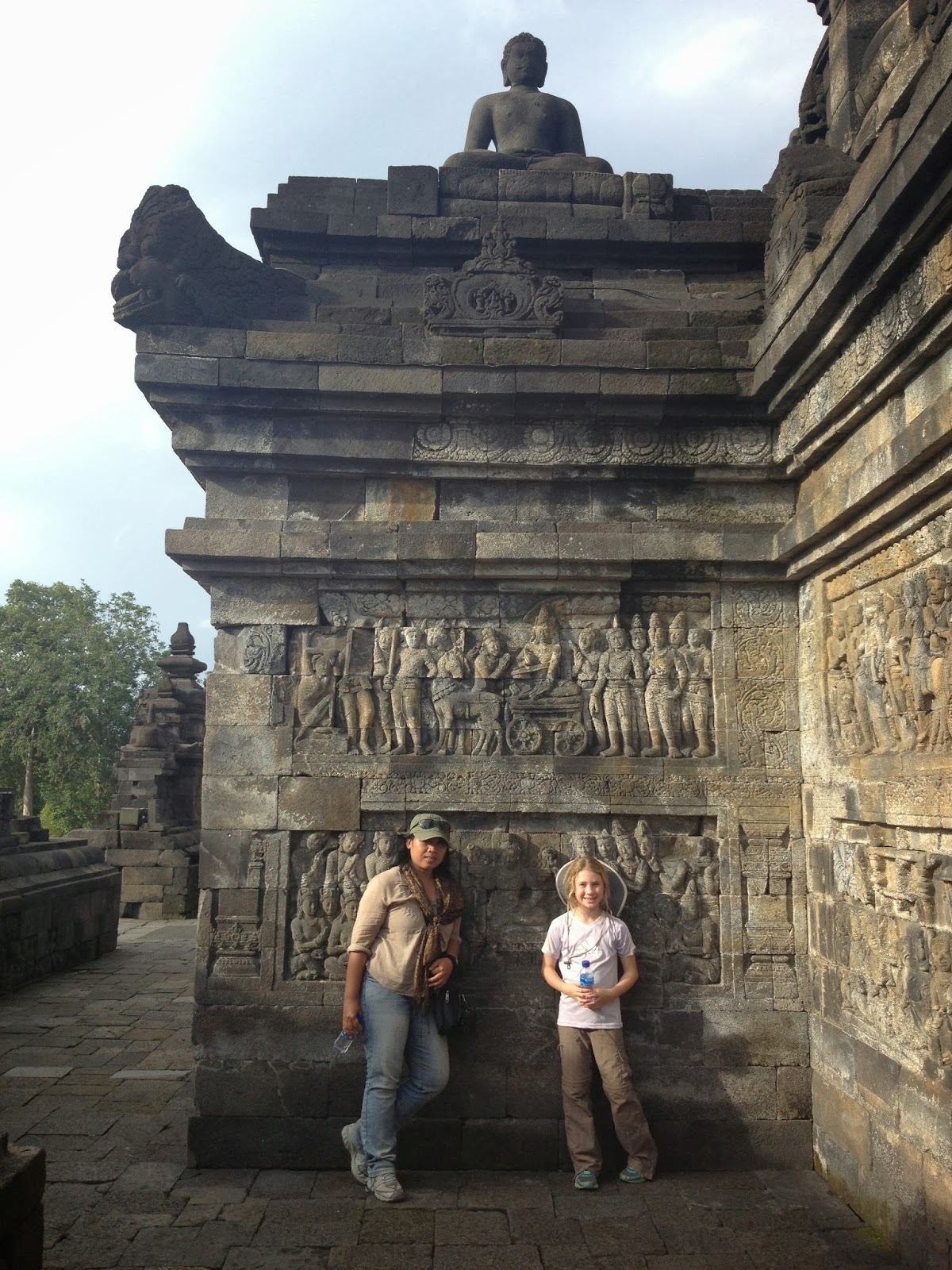 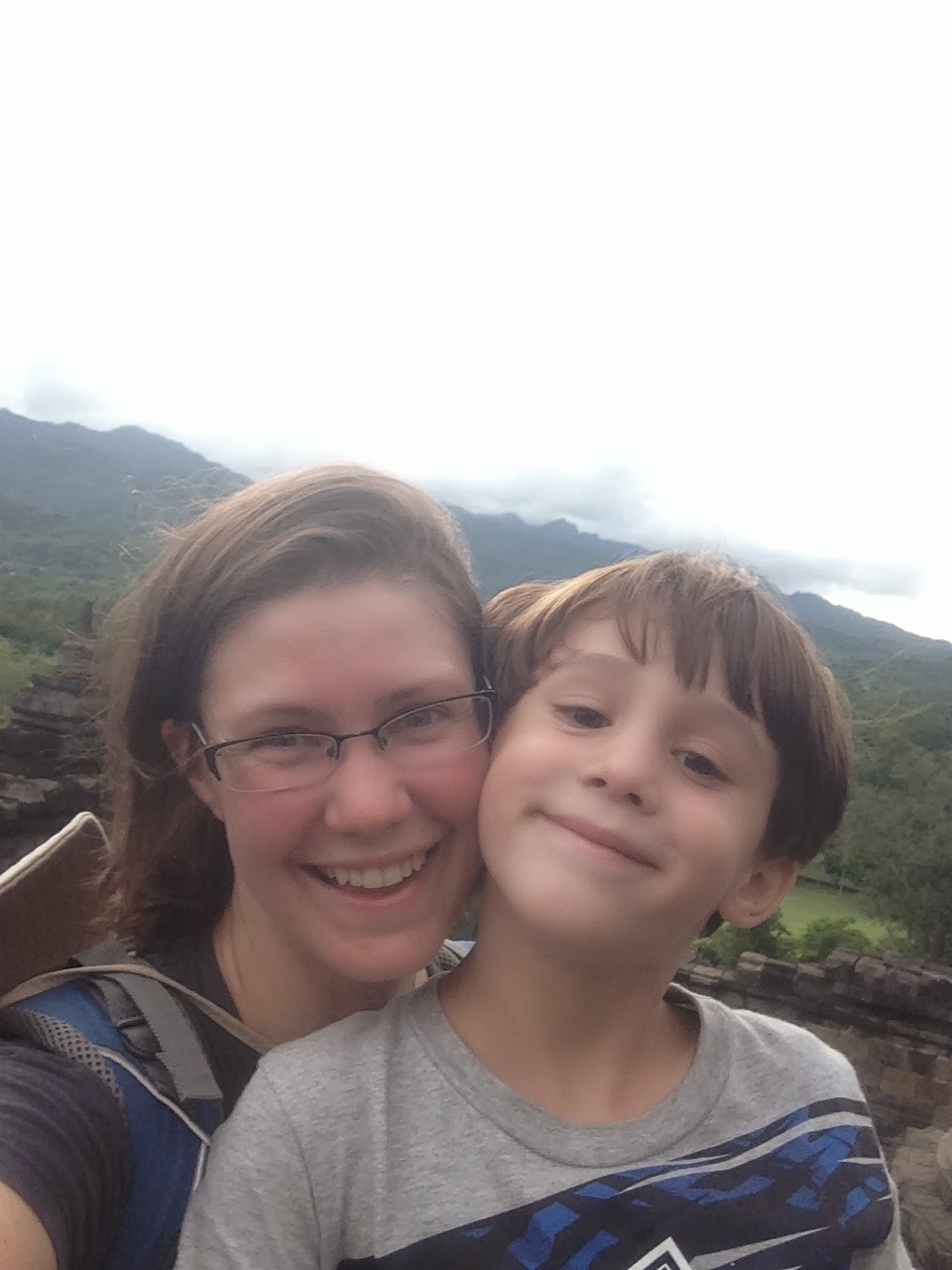 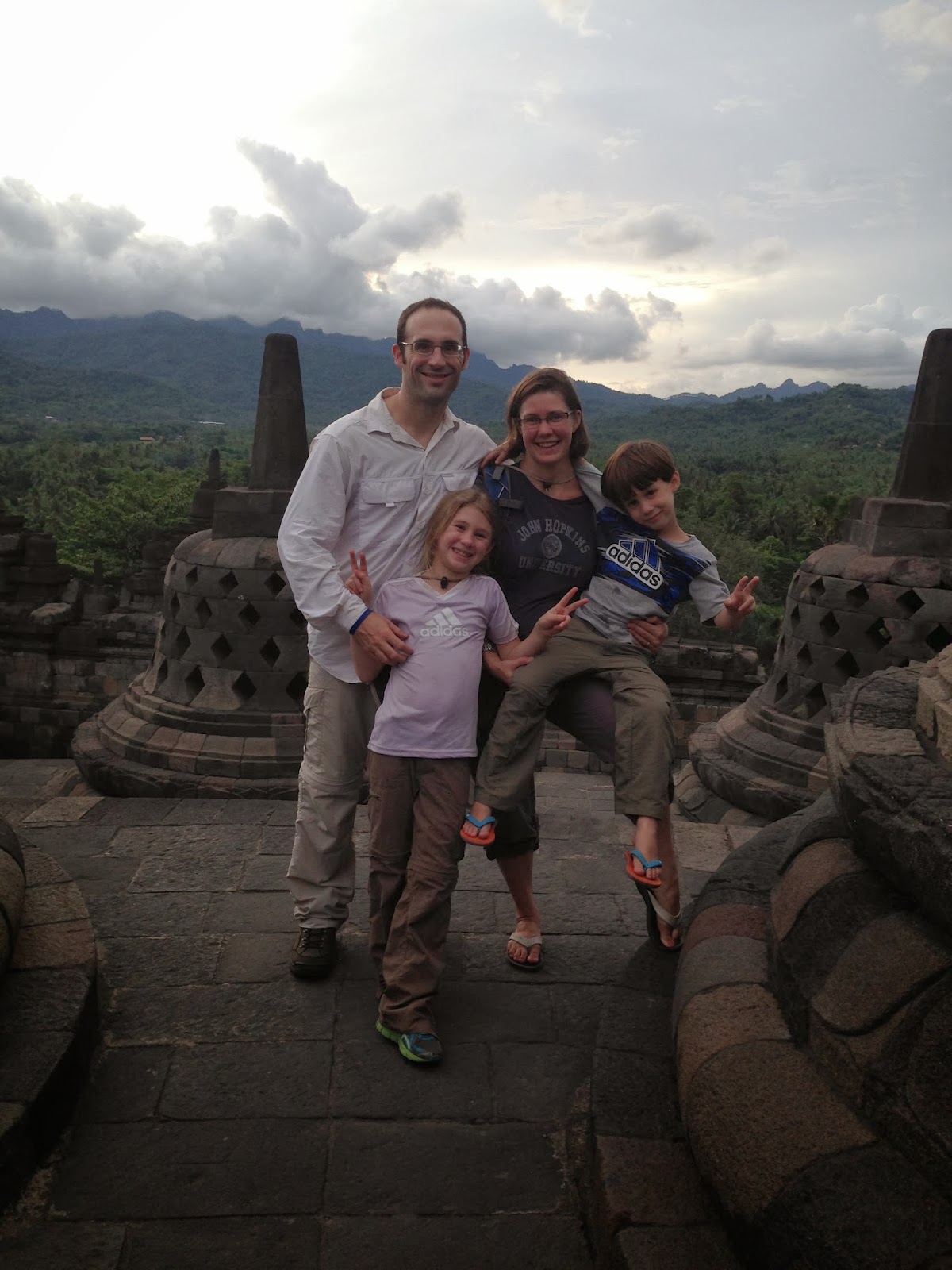 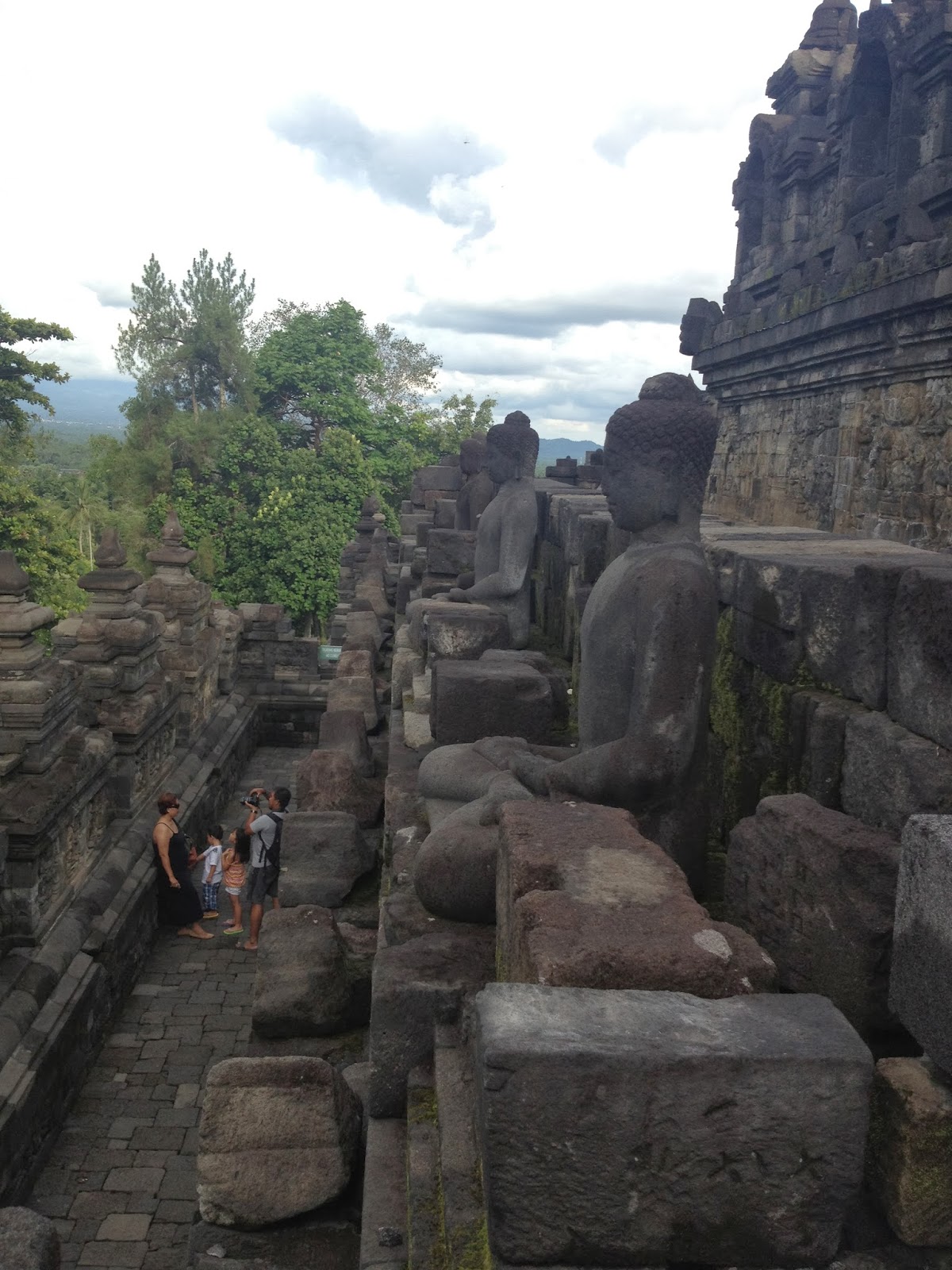 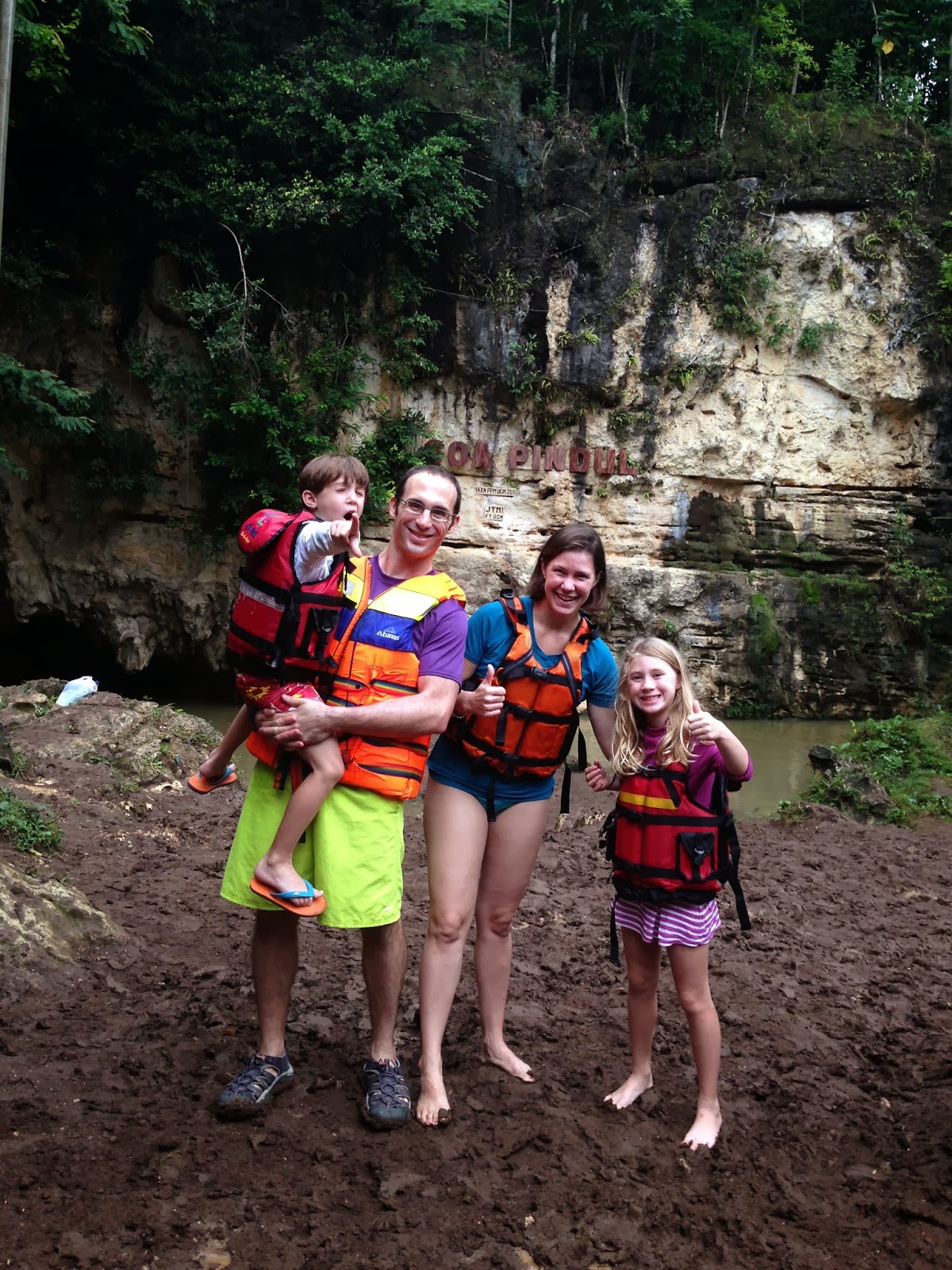 All parts of the visit with Lastri were a huge success. When we struck out on our own it was - well - an experience. We went outside town for a river caving tube ride thing. It was New Year's Day and crowded, I mean like mud up to your knees, fighting to get into the murky water crowded. Our enthusiastic guide spoke limited English and just keep saying - "No worry. You be okay. Mom, boy - you be okay. No worry. No worry." Yeah, sure, man. I'm in a floating tube, wearing a well-fitting life vest in a well-lit cave with like a 1,000 people in warm and nearly stagnate water. My only worries were giardia and leptospirosis. Just because it's un-fun, doesn't mean I'm worrying.

Leaving the assembly line tube tour, the four of us and a moderately amused Russian couple were stuck in the back of a pickup truck to head to the other river for the rapids "float". Before we left, the guide said, "Mom, give me camera. River is dangerous. River is dangerous." What? From "Mom, no worry" to flat out dangerous. He probably could tell from my face and said "Dangerous for camera. You be wet." Okay, feeling better. Still thinking of giardia and leptospirosis. The truck ride to the river was beautiful. Then the cold rain came. Then we formed a tube chain and cast out in the rapidly flowing and swollen river to view the river bank engorged with plastic bags. Trip meter approaching un-fun again. I'd call it maybe a Class 2, but I just hit a dip the right way (maybe wrong way) and shot out of my tube, as Brian said "like a champagne cork." Something went click in my head. This was no longer a passive float. I shed my tourist, "bring fun to me" mentality. I was now in full adventure mode. My feet went forward, I grabbed my tube, and used it to bounce off the rocks. The change was all in my mind. And it really was a - click. In the calm water, I popped up into my tube and joined our tube chain. When some tour organizers fished us out of the water at the end of the run, I realized I actually had a really fun day. Fun is mental. And sitting sipping hot tea at a road side stand with the Russians, I knew that at the very least, we had a pretty funny story. 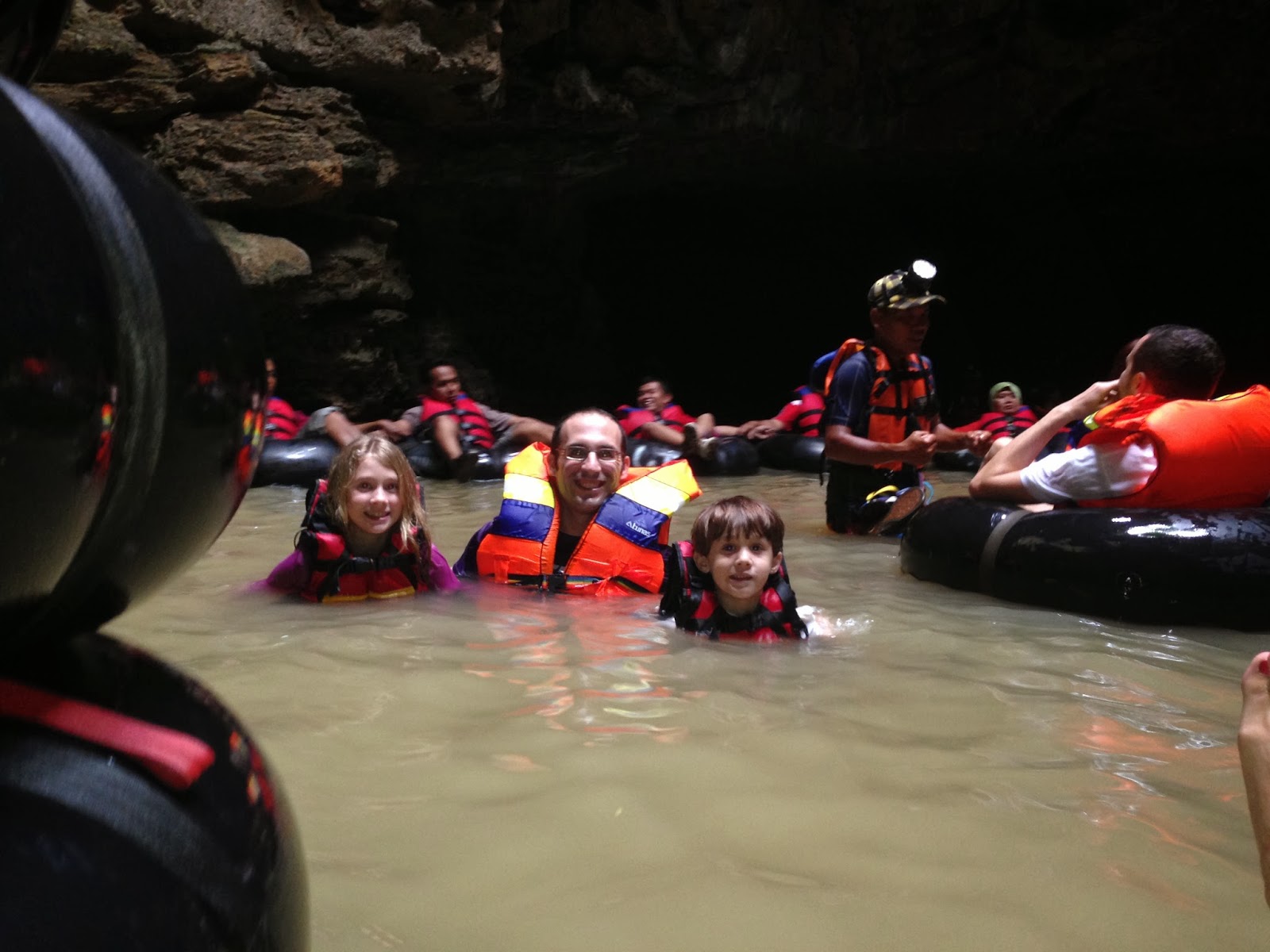 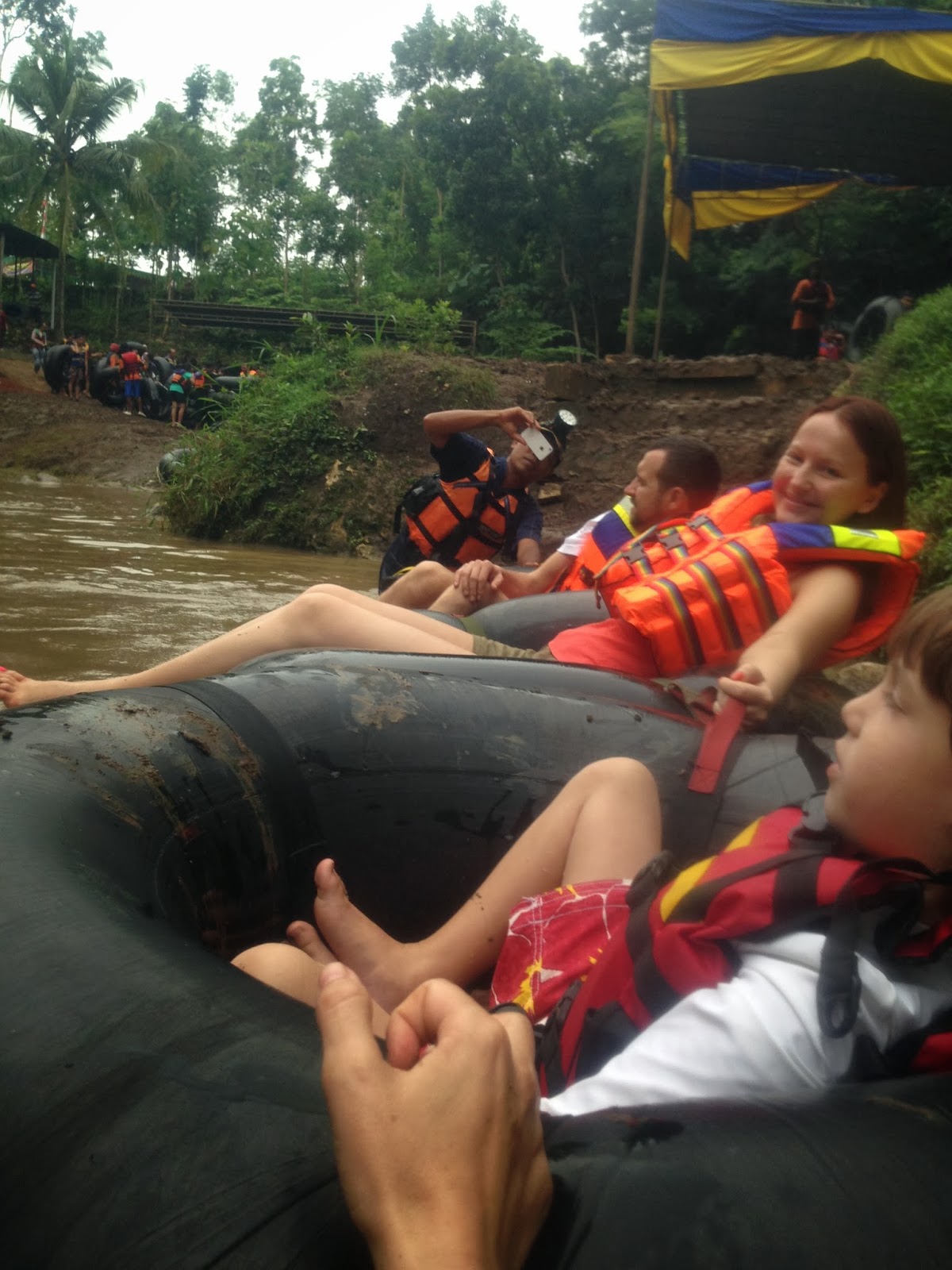 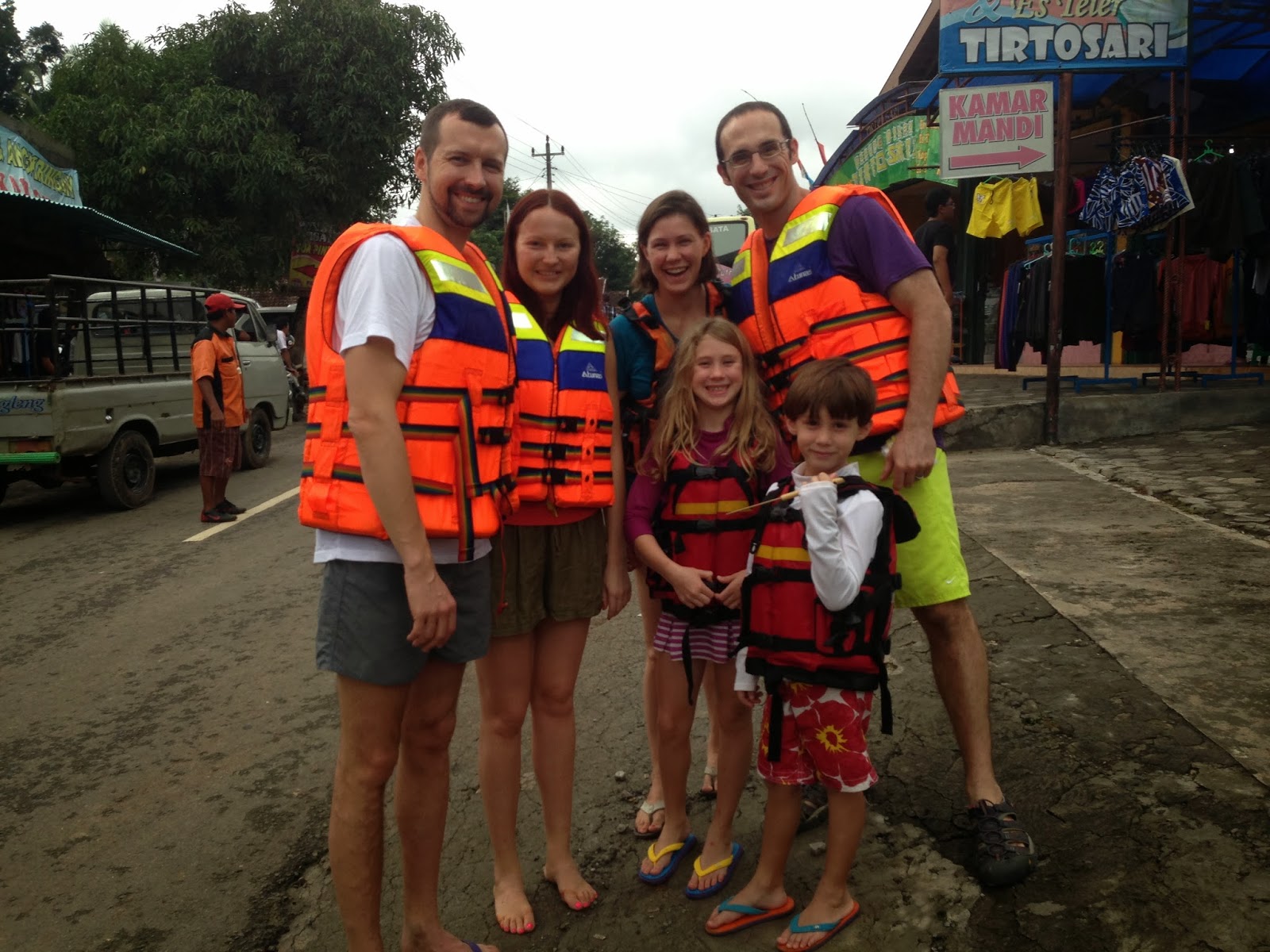 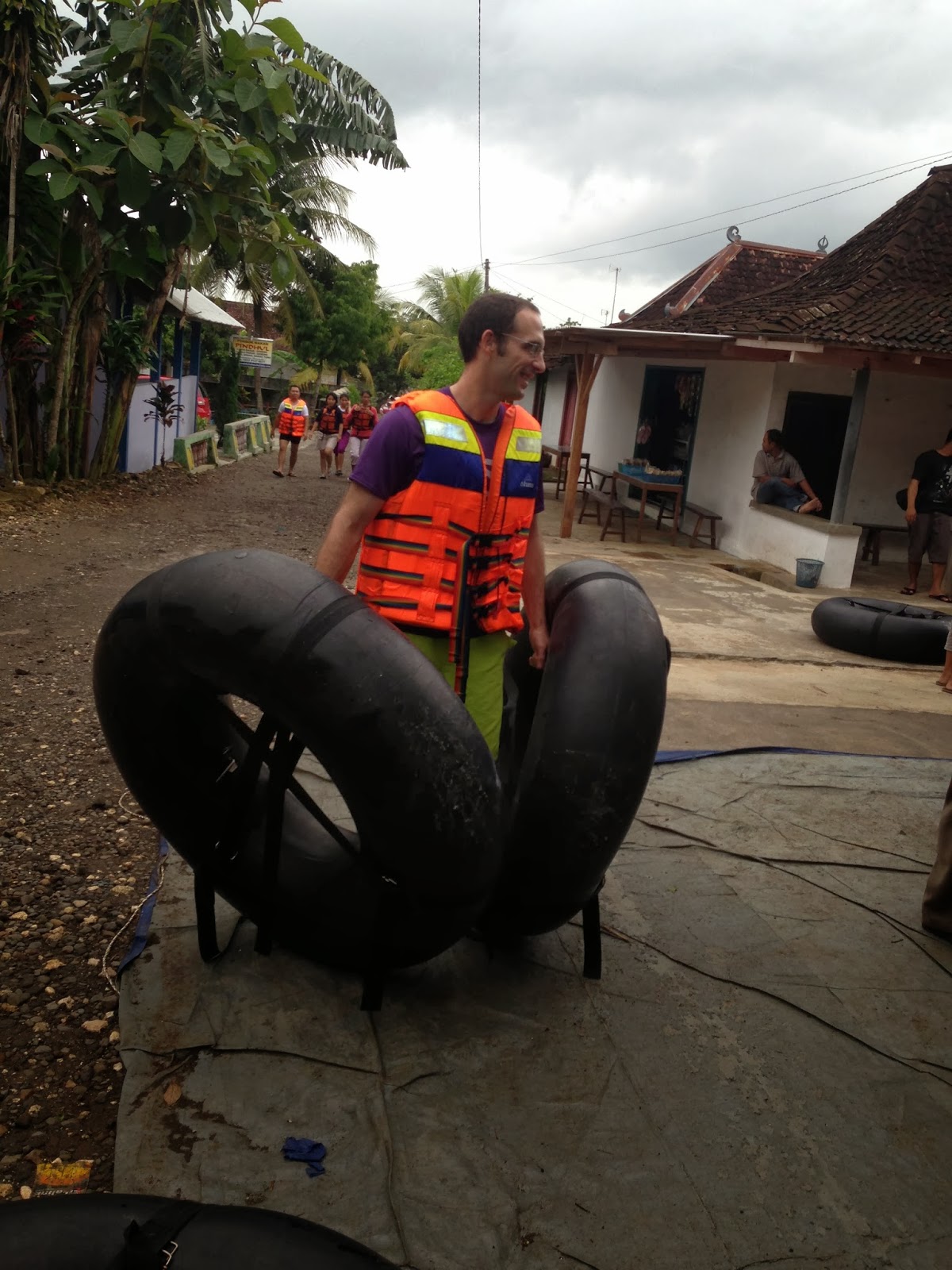 An incredible stay in Jogja! An incredible trip to Indonesia! We returned to KL energized. I'm meeting with Jan and Rachel to discuss continuing support for PPMK. The kids gained a glimpse-- hopefully a start to an understanding--of the world outside of their small realm. And from some agriculturally-polluted river in central Java, I remembered again to just let go and have fun.

Love to all around the world! Here's a picture from our final dinner in Jogja. 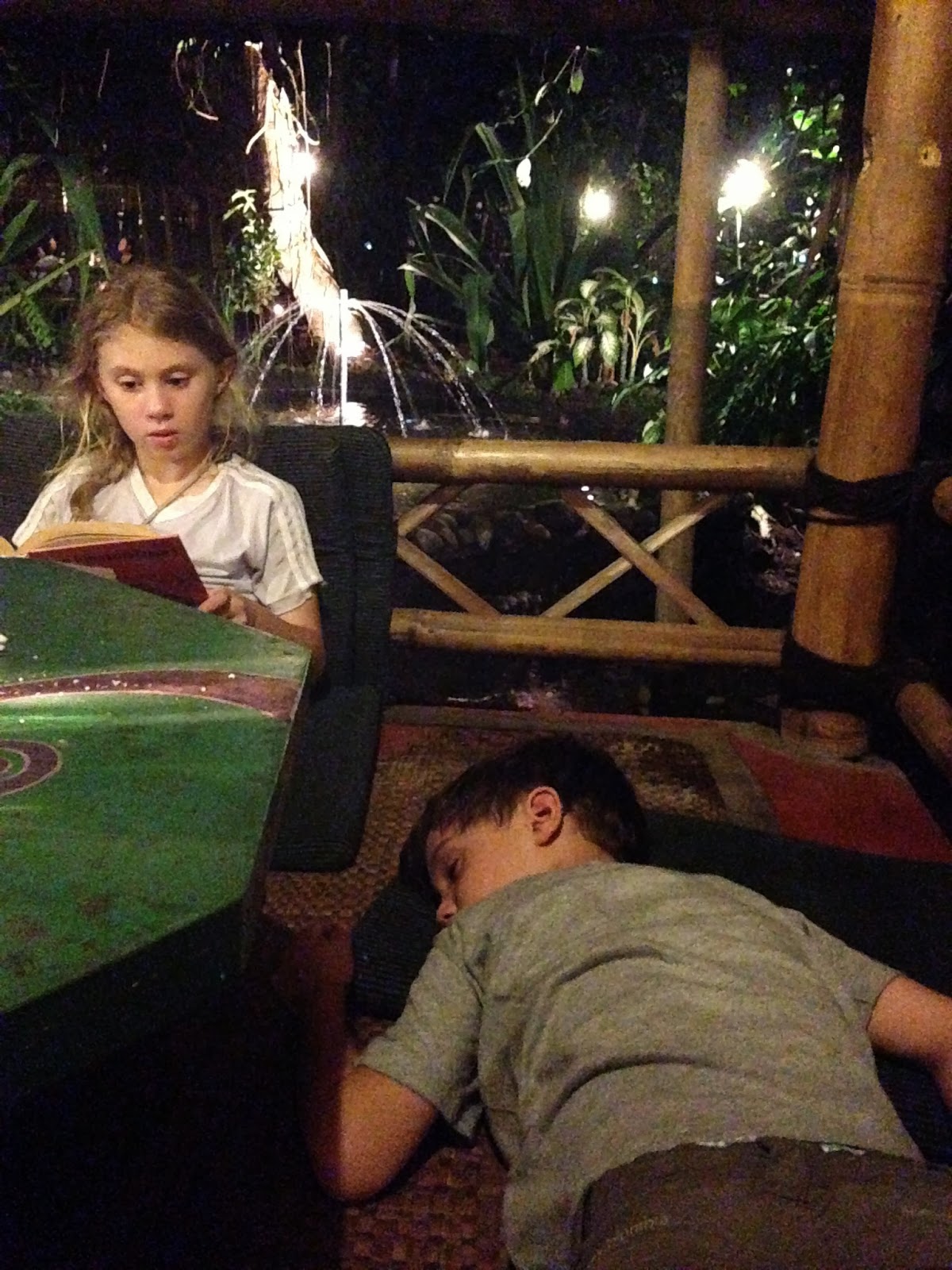 Find out more about PUGSOM